The Information and Privacy Commission New South Wales in action 3

Posted on December 12, 2015 by BestDoctorsSydney

On the 22 Apr 2015, one of our readers emailed Dr Andrew Brooks, using the email address on his website, asking how he could get copies of his “health records and information,” and followed it up with another 4 emails in the next few days asking the same question.

Having had no response to these emails, and having been informed by the NSW Health Care Complaint Commission that Dr Elizabeth Coombs, the NSW Privacy Commissioner, was the person to complain about doctors breaking the law by not providing their patients with copies of their health records and information, he took his concerns up with her in a letter emailed to her on 7 Aug 2015.

It took her office until 10 Sep 2015 to contact Dr Brooks, by which time, on the face of it, Dr Brooks had been breaking the law as set out in the Health Records and Information Privacy Act 2002 for 96 days.

But Dr Brooks said that he hadn’t responded to our reader’s emails because he hadn’t received them – the email address on his website was set up in such a way that it detected when an email was from a patient, and screened it out so that it wasn’t received!!!!!?????

Have you ever heard of anything more bizarre?

But it was an excuse that was plenty good enough for Dr Coombs. She immediately accepted it as something that completely absolved Dr Brooks from any guilt for breaking the law, and advised our reader that unless he had anything further to add, she was closing her file. 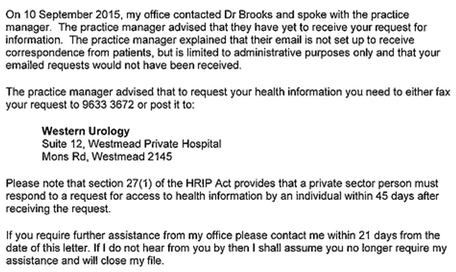 Was she concerned that the technical advice our reader received was that it wasn’t possible for an email address to be set up in the way Dr Brooks had claimed that his was set up? Not at all, not at all!

Was she concerned that our reader could prove that Dr Brooks had definitely received one of the emails he’d sent as a patient, because he’d replied to it? Not at all, not at all!

Was she concerned that most people would think that if Dr Brooks was to have an email set up as he claimed, it was reasonable to expect that his website warn his patients of this, and there was no such warning? Not at all, not at all!

So there you are doctors! If you want an excuse for not providing your patients with copies of their health records and information as the law provides, at least initially, you could use “the Andrew Brooks excuse” – it may not make any sense to anyone else, but it will be accepted by Dr Coombs who is charged by Mr Baird and Ms Jillian Skinner with making sure the law is complied with.

Dr Brooks obviously believes that Ms Coombs is not going to help our reader in any way – perhaps because he’s such a scoundrel that lots of his patients have complained to her in the past about him breaking the law, and she hasn’t lifted a finger to help them either.

This entry was posted in Dr Andrew Brooks Urologist, The Information and Privacy Commission New South Wales in action. Bookmark the permalink.